Preparing for an extended voyage

Preparing to depart for the 2010 sailing trip northward I was prepared for a series long and challenging departure preparations. I have found that planning, 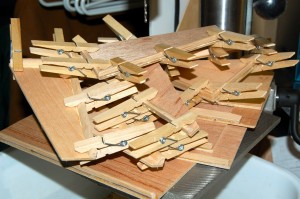 preparing, and getting underway to be some of the hardest project management I have ever encountered.

First comes the research needed for the trip. Where are we going and what are we going to need. Having a boat sitting in the water unused seemed like a sin, as well as a pointless money drain, so deciding to take a trip was easy. Choosing the location was a bit more challenging. Having grown accustomed to having the San Juan Islands easily accessible and the Inside Passage not far beyond opened up options when we were in Seattle. Having the boat in the middle of the Oregon coast presented a different set of options. We could turn northward, back to our old cruising grounds and perhaps beyond or head south. It wasn’t long before the conclusion was reached that if we ventured south we might never return as warm water and calmer weather is hard to pass up. While this didn’t sound like a bad proposition to me since I had to quit my job to take this trip anyway, it posed problematic for Emily who is still working on her masters degree.

Next out comes the ever-present project list for the boat. This is maintained with a permanent prioritization scheme but for each trip this has to be re-evaluated against the trips needs, budget, and time allowances. Simple and small projects are often moved up, if for no other reason than to provide us with a sense of accomplishment as the longer projects drag on slowly.

With a the project list finalized the purchasing phase begins. Ideally this would be a simple step but it inevitably drags on, requiring more time and resources than anticipated. This year, living in Newport, I was presented with a new challenge of actually getting the items needed; a problem greatly reduced when we resided in Seattle which has wonderful provisioning suppliers. To overcome this, I compiled a lengthy two page list of what I thought was needed, researched where I could ordered the items from, compared prices and shipping fees, and finally began placing the orders. In the end I had orders coming from ten different suppliers as well as the local marine store–which luckily is an amazing resource even for such a small port.

As the parts began to trickle in it was time to switch to actually completing the projects instead of just thinking and planning them. 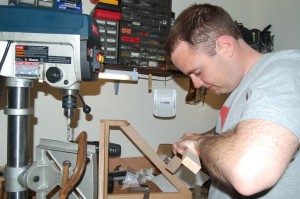 Having constructed a make-shift workshop in our guest bedroom I was able to work from home instead of on the dock beside the boat. Saws could stay out overnight on the workbench and dropped parts didn’t sink or float away. It was wonderful, at least until it came time to take detailed measurements on the boat. Then you’d be left wondering if you got all you needed after driving all the way into to town to get to the marina before driving home to cut whatever piece you were working on.

Keeping track of the resources at hand is a continual battle, whether it be your availability and energy levels, parts, tools, or space. 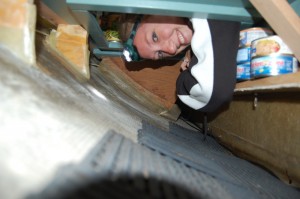 The living room became the staging grounds, with the cat wondering in-between piles for different projects, some bound for the boat, others waiting to make it to the workshop. For the first few weeks I was on my own before Emily finished her first year of grad school. Remembering where I was and what I needed to do next was easy, but after she finished there were two of us to coordinate with and even more projects to juggle as we each had our own list going that varied between one and two-man projects.

As the projects wound down we were presented with backorders and delays. One would have the expectation that supply companies would know how to track what p 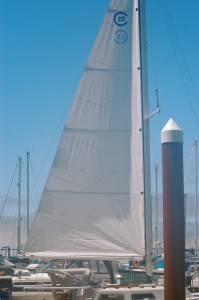 arts had shipped and hadn’t, what parts were still stocked versus what is displayed on their ordering system. This however, is not the case, even with large companies. E-mails and phone calls are necessary and often refunds and finding other supplies is required. With the items we were having made, nagging e-mails and phone calls were critical. However, even with those reminders, things such as the sail were still weeks behind schedule. Staying productive and on task proved to be challenging.

We’re now mostly done, only waiting on final adjustments to the new main sail which did not fit on the first try, and the weather to cooperate. The projects are done, the supplies stored, and the tanks are topped off. We’re ready to go, to be sailing, after two months of outfitting and endless project challenges.