Light of the Marina

Waiting for a main sail to be completed left us with the challenge of finding things to do. In my quest for reduced power consumption and love of LED lighting I discovered flexible strips of LED lights that came with an adhesive backing and were pre-wired for 12VDC.

The real challenge was finding a good location to install these in the cabin such that the light was diffuse and not shining directly in the eyes. In a house this is an easy task as they could be placed near the ceiling shining upward from drop-down crown molding. In Quagmire, ones head is at ceiling level and thus when walking around the lights would shine directly in ones eyes. Putting the lights on the ceiling pointing downward would solve the walking issue but would have them right in the eyes while lying down on the settee.

After much thought, discussion, and refinement the idea of placing the strings of lights on the main cabin windows was chosen. This idea had the lights being placed behind the white curtains over the windows at night, yielding a diffused and indirect lighting in the cabin. We decided to place the lights on the inside upper lip of the window facing downward, thus if the curtain was open the light would stream into the cabin. If one laid down on the settee the curtain could be closed, removing the harsh direct lighting. 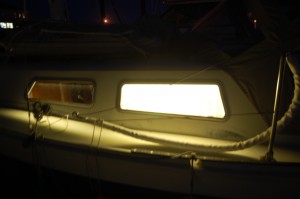 A side benefit of placing the lights on the windows was that they could also provide indirect deck lighting for walking forward at night. I had bought two colors of lights to install, warm white as well as red, the later in the hopes of providing light at night while underway that would not completely destroy ones night vision. And having the side decks able to be bathed in either red or white light seemed ideal.

Little to no thought was given to the outward appearances of the boat or how much light would be cast on the surrounding boats while at dock. In total we 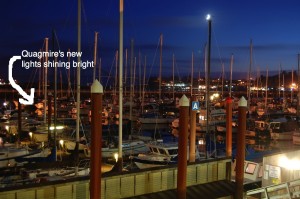 installed about 50 inches of white strip lights to the port side of the boat as well as about 20 inches of red strip lights. The white lights draw about a third to half an amp of power and produce a tremendous amount of light–about 100 lumens according to the documentation. While I don’t think in lumens well, I can attest to the fact that diffused over a large window at night these lights brighten up the marina. Quagmire suddenly stands out, lighting the deck, the finger pier, and the neighboring boat amazingly well. In a marina, we’re hoping the neighbors don’t mind all the light pollution. At sea, we think it might improve our chances of being seen at night should the need arise.