Upon our arrival I was relieved to find Rob securely tucked away in his crate in a container at the heliport in Uummannaq. With a few days of mooring preparation work ahead of us, there was not only time to set him up, but also to run a few preliminary tests out of the harbor.

As an Outreach Tool

With his bright colors and recognizable shape, Rob proved to be a popular topic with everyone, especially kids. At one point while I was working on the computer I looked over and noticed a local kid already experimenting with the remote, causing Rob to spin in circles.

We launched Rob out of the harbor using an old marine railway, carefully threading a course to open water through all the boats and their mooring lines. 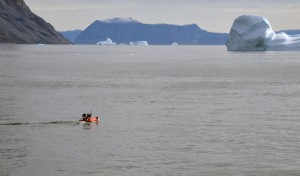 Compass calibrations proved to be elusive due to the weak horizontal magnetic fields this close to the magnetic north pole and strong local variations.

me tweaking as the new heavier RBR CTD requires more spring force on the A-frame to fling it into the water, but too much spring force keeps the winch clutch servo from disengaging the winch’s clutch to allow the free-spooling of the line out. Finally a reliable combination of four different A-frame springs was found, and Rob headed out for real CTD profiling.

During the final test in Uummannaq, the wind came up to 10-12kts and some small wind chop (6-10 inches) developed. While Rob performed admirably in these rough, to him, conditions, it was too much for one of the A-frame connections. The wave action and heavier CTD snapped a piece of ¼-20 threaded rod at the base of the A-frame, requiring some repairs at the dock.

On the second day of 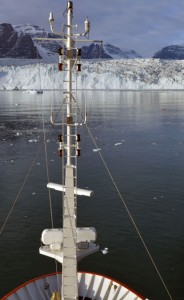 the cruise aboard the R/V Sanna we found ourselves at the face of the Umiamako Glacier terminus. This was not the original plan, but high winds in the Rink fiord had driven us out for the day. With some clear water and calm conditions, Rob was launched.

Using autonomous mode proved challenging due to the many floating pieces of ice. So instead we drove Rob manually as close to the face of the glacier as we could and took 18 CTD profiles to 120 meters depth on the first set of batteries. Having the pivoting camera on Rob helped tremendously, both to watch for ice in the path as well as to look back during CTD casts to verify the line was spooling out properly. 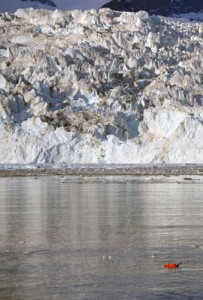 A second deployment on a fresh set of batteries was started at twilight. The small LED navigation lights proved invaluable, as was the low-light capable camera that was able to see a reasonable distance forward on glow from the nav lights. The second trip I was able to mostly parallel the ship with Rob driving right along the ice line at the base of the glacier.

Small chunks of ice didn’t seem to bother Rob until the very end when a piece got stuck in each propeller duct, preventing Rob from being able to move. Luckily, Rob was already back to the location of the Sanna when this happened.