As I was finishing my bachelor’s degree in physics, I joined the Plasma Dynamics Laboratory at the University of Washington. Shortly after starting there I was assigned to design and build a megawatt scale plasma thruster that was being funded by the U.S. Air Force Research Laboratory. This space-based 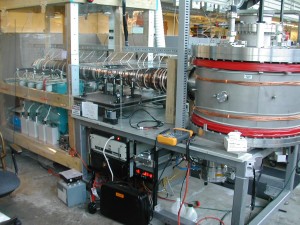 thruster utilized the principle that an field reversal configuration plasmoid could be accelerated to very high speeds down a tube with a propagating magnetic field. A thruster like this that produces extremely high specific impulses with an exhaust velocity in the order of 200 km/s would enable spacecraft to make orbital changes while greatly reducing propellant mass usage.

I was given a very large degree of freedom on this project and left to my own resources to design, fabricate, and integrate everything from the vacuum system to the high-voltage system needed for the propagating magnetic field to the control and data acquisition system. To complete the system in the year it took, I had two graduate students and three undergraduate students that were also assigned to the project whom I managed.

In late 2005 I traveled to Denver Colorado to present the poster for the experiment to the American Physics Society – Division of Plasma Physics yearly conference.

A high-velocity plasma accelerator utilizing a Propagating Magnet Wave (PMW) has been designed and constructed that is directly applicable to space propulsion as well as to new innovative high energy density approaches towards fusion. The PMW plasmoid accelerator also has possible applications as a fueler for future fusion reactors such as the international fusion reactor, ITER, as well as current tokamak experiments for adding rotational momentum and velocity shear for enhanced stability and transport control.


The natural application for the PMW accelerator is for high power electric propulsion in space. For this purpose the PMW is employed as a pulsed thruster that operates naturally at both high power and efficiency with no need for electrodes or grids. Operational parameters can be varied over a wide range in both exhaust velocity and propellant mass. To efficiently accelerate plasmoids to high velocities an acceleration method other than the simple tapered coil must be employed. In these experiments, the rapid acceleration of a compact plasmoid is realized through the application of an externally applied propagating magnetic field. Here, the large axial JxB force is generated from the induced azimuthal current inside the plasmoid and the radial component of the external, axially propagating magnetic field. This accelerating force is sustained as long as the plasmoid remains in phase with the wave field. Exit velocities greater than 200 km/sec for plasmoid masses on the order of 0.1 mg are anticipated from the device that is currently being tested, and the results from the initial experiments will be presented.