Frontier military outposts required lines of communication to other outposts, supply depots, command centers, and field operations. The telegraph was a revolutionary form of communication in the 1870-80’s for the U.S. Army across the American frontier.

Starting in 1875-76, the U.S. Army built the first 25 telegraph stations in Texas. In 1882, the U.S. Army’s telegraph system in Texas, carried 196,999 messages via 1,565 miles of line. “In August, 1880… Apaches tore up telegraph lines and poles between Fort Davis and Fort Quitman. After repairs were completed the Indians destroyed the line again in May, 1881.” (Smith, 1999) The telegraph became important in the Victorio Campaign because it gave the U.S. Army near-instant communication capabilities.

By 1885, under the directorate of the Secretary of War, all but 197 miles of telegraph line in Texas was auctioned off to private business. Included in the remaining line was a twenty-two mile line from Fort Davis to Marfa that was operated until 1891 when the outpost was abandoned. An army telephone was installed from Fort Davis to Marfa in 1890, so technology continued to evolve. (Smith, 1999)

The telegraph required a code of ‘dots’ and ‘dashes’ to transmit textual information—Morse code. This code had to be learned by the operators much like texting or typing today. Because the public visiting frontier military outposts may not understand the complexity and challenges facing the operators in sending and receiving even simple messages, a theoretical hands-on exhibit has been developed.

The exhibit is composed of two historical Morse code messages (taken from U.S. Army records) displayed across the exhibit’s backboard. Immediately below each Morse code message is a bar protruding from the backboard that contains a series of individually rotatable wheels. These wheels consist of six sides. Each side, has a letter and the corresponding Morse code below it. 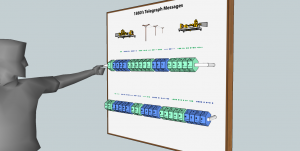 To use the exhibit, the visitor rotates each hexagonal wheel until the correct Morse code pattern matches the message’s pattern above. The visitor is then able to work on solving the next letter in sequence, allowing the message to slowly appear. The hexagonal wheels would allow the visitor to see the message in its entirety once the translation is complete.

An additional option would be to have an electronic button beside the message so the visitor could hear the Morse code as the operator would have heard it.  Depending on the complexity allowed for by the exhibit’s budget, it would also be possible to have the Morse code message (on the backboard) light-up in conjunction with the audio. This would be similar to the bouncing ball for sing-along or karaoke subtitled music. 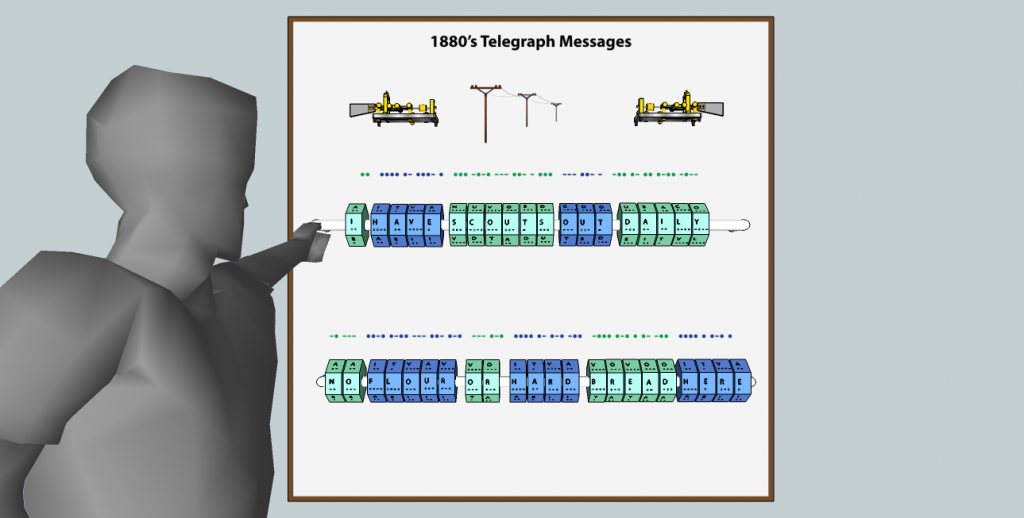 Please contact the OceanTrekker authors before use of this exhibit design.