Bella is special; she’s not at all like the labs that I grew up with, or many of the other dogs that either of us are used to having in our lives.  For one, she doesn’t play fetch.  At all.  She can’t even be bothered to chase after the ball and then not bring it back.  She just rolls her eyes at your for losing it in the first place–and why should she have to go get it if you lost it! 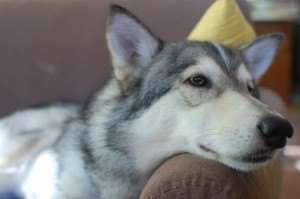 She is also a couch potato.  By 9 each night, no matter what we’re up to, she’ll let herself upstairs and curls up for bedtime.  Heaven forbid we try to wake up early in the morning and don’t let her sleep in!  I tried taking her for a run in the morning once and she just bumbled along behind me half of the trip until we finally saw a squirrel and she woke up to chase it.

Bella and the cat like to spend much of the day curled up napping and looking out the window.  Bella takes the couch cushions and Squeak the back of the couch.  When we get back from work, after a pause for them to hear us coming, yawn, stretch, wipe the sleep out of their eyes, and stumble off the couch, we will see them both expectantly waiting at the window.  Once we’re inside they greet us and we give Bella some tummy rubs and Squeak some spankings, but by the time we put the mail away, they’ll both be dozing away on the couch again.  Until 4 PM. 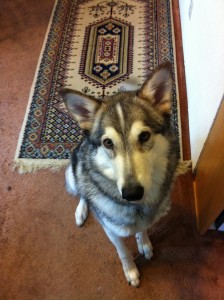 At 4 each day, rain or shine (Bella prefers rain), Bella will pop off the couch and start following us about the house.  If that doesn’t work after five minutes her doggy-patience wears thin and she will give us little reminders like bumping us in the arm, jumping around, or howling at us.  If we ignore her long enough, she will eventually give up and curl back up on the couch and just give us the stink-eye until one of us caves in.  It is time for her afternoon exercise.  And, since fetch is out of the question, that used to mean one of two options: I took Bella running for at least 3 miles–or Jed took Bella running for at least 3 miles.  Sometimes, we can take her to the dog park instead, but unless there are enough hyperactive puppies there to chase it doesn’t always tire her out well enough to last her until 4 the next day (or 7 in the summertime).  Even running doesn’t really get her tired (not at our pace).  A few times we each took her on our normal loop in the same day and you could still hardly tell she’d been out at all.

Obviously, this routine was not going to last forever.  Although we appreciated the health benefits, sometimes we’d get our workout in somewhere else, like playing volleyball, or just not feel up for running.  We looked into doggy treadmills, but couldn’t quite bring ourselves to  invest in one of those.  So, since we had ourselves a mutt with a lot of sled-dog in her, we bought her a harness and a scooter (for no-snow mushing, with brakes and an easier exit-plan than bikes afford).

We started by hooking her up with one of us on the scooter, and the other of us running along in front of her and calling her until she got used to pulling.  A block or two later, she was pulling the scooter well in front of the runner, who was sprinting down the path trying to keep up.  Then, she’d see a squirrel, or a blade of grass, or just get tired and the whole parade would come to a pile up.  While she wandered in circles, tangling the lead and tying up the scooter, the runner had a chance to catch up, and collapse onto the scooter.  Then Jed or I got to untangle her and then work on catching up again after Bella would take off.

In the summer Bella would overheat after about a mile of mushing (we think this is why she was so easily distracted and ready to stop so frequently), but as soon as the cold set in our whole routine went out the window.  We took her up to the trails in the McDonald Forest.  The first time we went in the winter one of us rode a mountain bike and one of us was on the scooter.  This was a fortunate decision. 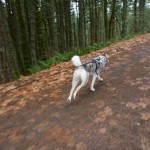 Bella started off the trail and showed no sign of slowing, even while slogging up a hill with her tongue nearly dragging on the ground.  I could barely keep up on my bike; she even beat me all of the way to the end after 4 miles of pulling Jed and our heavy-duty scooter up and down the hills.

Since she is a house pet, and we do still want to be able to keep up on the days we take her running, we usually keep our mushing trips down to about 4 miles or less and help a lot on the hills.  She loves it, though, and we’re both glad that we’ve found something other than a 4-hour off-leash hike that can tire her out. 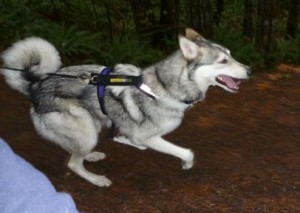 The harness was only $30 and came personalized with her name embroidered on the top and reflective fabric on the sides.  We found the scooter used on Craigslist.  I wouldn’t recommend adult scooters as a recreational activity, but for mushing, it has been well worth the $150 investment (much less than a doggy treadmill, and much more fun)!

Below are some video clips we took from our last mushing adventure in the woods.  It is hard to film, especially the faster flat and downhill bits, so the filming barely does it justice; but I think we may have done a little better holding the camera still at least than in some of the other You-Tube clips that we got motion sick watching. 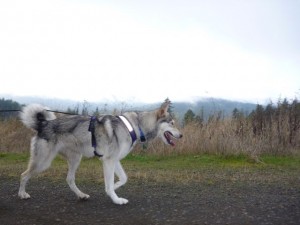 If you are interested in beginning recreational mushing, I have to say, it was easier than we thought to get started.  The training, for example, did not take long.  Before we got the mushing supplies, we practiced the commands with her on our morning walks–which we use all of the time for stop (woah), slow down (easy), speed up (pick it up, or two clicks), turn right (gee), etc…  Whenever we’d turn, we’d just say the turn command as we did it, until she caught on and you could make her turn on her own.  We don’t usually have her heel, so she’s used to walking or running just in front of us, so we use the commands all of the time instead of body language. We looked up mushing commands on-line and agreed on which set to use before we started. 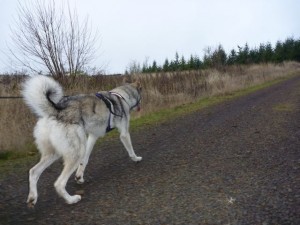 When she has the mushing harness on, she knows to pull.  When we stop or walk, we take it off, so she knows that it is only for pulling.  The mushing lead also has some bungee cord sewn into it, so that when she does pull it does not jerk her as much during each step or when getting started.  However, it is still important to pay close attention and to try to keep constant pressure on the line, even when she slows down or is going down hill.  At first she was nervous about pulling because she’s usually not supposed to, but with encouragement and by being consistent about the difference about when she’s supposed to pull and when she’s not, she’s done fine.  Since she loves pulling and being able to run fast, it hardly took any time at all to get her used to mushing and the new harness.

It did help to have a lead runner for a while, to get her to realize that “Pick it up” (or two clicks) means that she can go 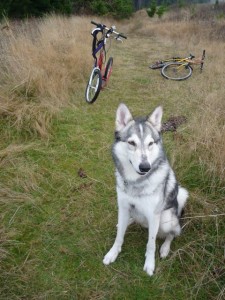 as fast as she wants until we say “easy”.  Since she is much faster than either of us (we’ve seen about 18 mph when mushing quite a bit), she used to be rather limited on how fast she was allowed to go on leash.  When she’s in practice, it only takes one of us to mush her, but if we haven’t gone in a while, it helps to both go still.  Sometimes we take her around the neighborhood, but it’s fun to get out in the woods.  The challenging part is finding flat enough trails that she can get into a rhythm.  We haven’t taken her up to the snow yet, but that’s next on the list to try!