Since the both of us have been working from home as of late, there weren’t many good excuses not to drive up to visit the family for the holidays. We could crash with my parents and eat home cooked meals and goodies while sitting on the couch with our laptops still logging a solid work day. There was a catch, though. The cat wasn’t all too thrilled about spending a long holiday break in a freezing cold house with no wood stove to crawl under for warmth and no fresh treats and *gasp* no spankings (look it up on You Tube – it’s not just her, I swear, cats LOVE to get spanked (some cats, claims Jed)). We felt a little bad since we left her with a kitty sitter all summer and she had to share her house with *gasp again* another cat. So we debated: a) leave her at home with the house heated, her water fountain, automatic cat feeder, and heated+vented litter box – we don’t typically actually have to tend to her other than spankings much more than every couple of weeks, or b) take her with us. All of our friends were going up to Seattle for the holidays as well, so a cat sitter was out of the question.

We dreaded both options. The way we saw it, either we left her at home to go stir crazy and more than likely come back to some sort of surprise for us, or take her with us to go stir crazy and get the surprises on the holidays. We called my parents at the last minute to cancel, and delayed the trip by a day, but my mom finally talked us into it. So, we packed her a travel bag, stowed the litter box in a garbage bag in the trunk, and got under way, cat in tow.

We tricked her into eating some kitty calming treats that we’d bought the one other time we’d attempted this sort of thing – when we moved with her down to Newport from Seattle. They didn’t seem to do much. She wanted to know everything that was going on. She really wanted to drive, actually, but even though we let her out of the crate to explore, we had to draw the line somewhere.

Fortunately, she settled down relatively quickly and chose her spot in the car sitting in the back window. Unbelievably, she stayed there, entertaining herself by entertaining the passers by, the whole drive. 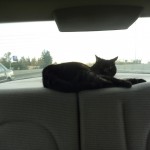 She even settled down enough to take naps and baths, even though she’d give us dirty looks and huff around a bit if the road got rough or we went over any speed bumps. She’d also let out a mew every time a Semi passed. Or a Suburban. From time to time, she would even come up and sit in my lap for a visit. Overall, we were very impressed and starting to get the feeling that this wasn’t going to be such a bad Christmas break after all. We tried very hard not to think about what she was about to do to my mom’s brand new couch and how many visits to the local vet we’d have to make between her and the dog. If we didn’t think about those things, maybe they wouldn’t happen. Right? 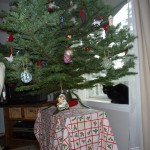 We also weren’t so sure how long the tree was going to survive. Our first full day in town, we put up the tree and hung the decorations. While other little kids may have been going to bed with visions of plumb drops, I went to bed with visions of other things dropping, breaking…general chaos. Surprisingly, a little after bed time, we heard the little ticking of her claws on the Pergo floor in the hallway and felt her little body plop down on top of us for the night. She also amazed us both by using the scratching toy that we brought her and not a claw came out on any piece of furniture.

The Pergo floors that we’d helped install a few summers ago were a real treat for us, because we could hear exactly where she was at all times without having to keep an eye out.

It turned out, however, that that didn’t actually matter either, because we knew exactly where she’d be whenever the heater was on, anyway. She staked out her territory pretty quick and the dog kept the dog bed. For two weeks, even when we moved houses once, and drove her back in the car without any kitty calming treats, she made herself right at home and was happy as a clam – making this a terribly boring and uneventful story. Except the part where I lost my mom’s dog. We found her eventually, about a mile up the road and counting, but we did find her…

One Response to “Kitty Christmas”