Jed and I (Emily) circumnavigated Vancouver Island the summer of 2007 in Jed’s 29 foot sailboat, Quagmire. We spent six weeks on board, mostly at anchor, only pulling in to docks while in Friday harbor and at Nanaimo, Port Hardy, Tofino and Ucluelet. My little sister, Shannon helped us push off July 31st and got us up to Friday Harbor, cooking and helping Jed with the sails whilst I got my sea legs. We had a lot of fun, and got to see a lot of harbor seals and porpoise! 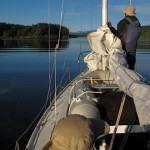 We picked up Jed’s dad, Barry, and, while waiting for forgotten customs paperwork to be air-mailed from home, we circumnavigated San Juan Island. While becalmed right before sunset in Haro Straight, we were lackadaisically passed by a huge pod of feeding orcas to wave us bon voyage.

Customs in Sydney went smoothly, although the full-size colors on our small-size boat were a constant flapping distraction. We flew up the inside of the island with favorable winds and currents, unaware that these ‘rare’ southerlies were going to stick around to greet us when we reached the north end and turned south. It was a gorgeous trip up. There were quite a few cruisers in the Gulf Islands, but often setting 2-3 anchors and shore ties, we managed to squeeze our way into some fabulous uninhabited crevasses. 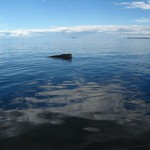 I think coming into Port Hardy was unanimously voted one of the top three parts of the trip. Trying to cross Queen Charlotte Sound with a reef in the main and our storm jib up, expecting a stiff breeze, we did some man-overboard safety drills – and within 15 minutes were completely becalmed. After a productive few hours of fishing – Jed and I tangled, then untangled and recoiled the entire line – we were joined by some transient orcas for lunch, and having made no headway, decided to pop back in and cross the sound the next day. On our way in, we were trying to identify some spouts with the whale watching book we had. We narrowed it down to one of 3-5 species of pilot whale or blackfish, which seem to have no distinctive characteristics from each other anyway, so we decided to call it close enough when suddenly we were all completely startled by our minke surfacing just feet from the boat! He surfaced and watched us very closely three times before going about his business. We believe we saw the same one heading out the next morning and possibly the back and spouts of a blue whale while coming into the harbor (it was huge, and we couldn’t identify it until Jed noticed on the front page of the papers the next day that there had been rare blue whale sightings that week). 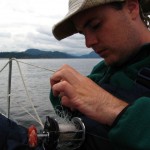 Port Hardy itself was also by far our favorite stop. It was a very quaint and friendly town where we made friends with our neighbors and found some fabulous hikes. We also purchased a second depth sounder since our brand new one failed – the only big drama of the trip aside from Barry losing a pair of glasses overboard. On our way out of Port Hardy marina, we also saw humpbacks breeching for 30 minutes, putting on a show for the tourists.

We had perfect weather for popping around the northern tip of the island. Before we crossed the Nawitti Bar into the Pacific, we anchored in Bull Harbor, from whence we could row ashore in “swampy”, the dinghy, and take a traditional Canadian hike driving through brush and rugged landscape (this is what we experienced every time we thought we’d venture forth from the boat to stretch our legs) to the exposed side of the island and got our first look of the ocean swell. 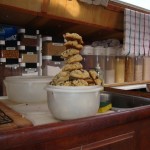 Once in the open ocean, our obvious over estimation of the amount of food we’d need compounded itself as Jed and I often skipped lunch for the sake of keeping our stomachs. We also, for the first time, had a clear horizon with which to take noon navigational sightings – at least for the first three days until the clouds settled in. It was exhilarating to be able to stand off and give up tacking back and forth as in confined channels. We also enjoyed the new wildlife on the outside – a few sunfish sightings, sea otters, black bears, and humpback whales frequently.

Another of everyone’s top three days was spent in Columbia Cove, on the south side of Brooks Peninsula. To wait out unfavorable winds, we took a day off, and took a “hike” (muddy scramble?) to the huge sandy beach along the coastline. The water temperature in the ocean there was 68 F and there was a stream to play in that we dammed with driftwood and rocks while picnicking. It was a beautiful sunny day spent at the beach.

From there, we had a bit of a struggle home. The winds were predominately ‘rare’ southerlies, and where there were more protected passages inside of islands to travel along to avoid the opposing winds I’d lose my sea legs and be ill all over again every two or three days when we’d venture back out. Although we probably saw 30-35 knot winds at least once, these were apparently no big deal to even the itty-bitty fishing skiffs that were out in the swell in all weather with at least double their passenger capacity. They were also not slowed at all by the fog, which is where we all got our grey hairs when a large research vessel disappeared not an eighth of a mile from us into the mist. 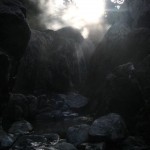 Another of the highlights, however, was seeing the Hot Springs near Tofino. Tofino itself was too touristy and crowded for our taste, but we managed to avoid the crowds of 20+ by just a few minutes and have the hot springs to ourselves. Jed and I soaked in the relaxing water that ranged from a scalding 50 C (120F) at the waterfall to 10C (50F) in the tide pools farther down while looking out at a beautiful sunset over the ocean. The next morning we all manged to get up early and explore the pools on our own in the cool morning air. Some of the pools are covered by the sea at high tide so you could even tide pool in them. It was gorgeous!

The trek back to the US was exciting – a nice calm sunny day with just enough wind to get us home. We listened to someone else with an engine room fire over VHF 16 and ate all of our baked goods and contraband food before customs. We had customs Agent C on his first day reporting for duty and his impatient but probably well entertained trainer to sign us in at the Port Angeles customs ‘dock’. Our first night in the US we sailed up to Dungeness Bay during a breathtaking sunset and settled in next to a tug that looked to be on its way out…then the apparently abandoned crane on the other side of us turned its lights on and revved up for the shift and motored over to the tug where they settled into their dredging operations. 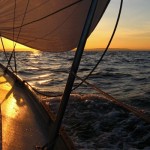 Sunrise in the Puget Sound, welcoming us home

Nonetheless we made it home in one piece and lost no one overboard until two days out, when during clean up, a sponge went overboard and we almost lost half the crew in the unexpected man-overboard drill and our traveler line snapped…but we managed to pull through and rescue the sponge. After the many months of preparation and planning it was a fabulous adventure with many new and exciting memories and more being planned.