We’ve been talking about getting a dog for a while. We’ve even done research into tricks and tips for having dogs on board for day sails and extended sailing trips. Neither of us are picky about breed – we were just looking for an easy going and adaptable temperament in a medium sized short-haired dog so that it could fit into the small space of the boat and not require excessive grooming or vacuuming. We ended up with a large, furry mutt named Bella.

We were advised to introduce the new puppy to anything that we’d expect her to participate in with us early so she could adapt during the getting to know each other phase. Our first weekend was spent desperately trying to get her all of the supplies she’d need and introducing her to the cat. Weekend number 2, we went to the boat. 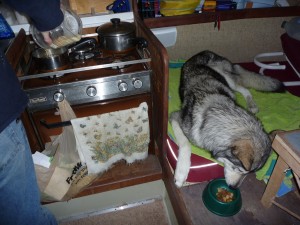 Introduction process step 1: We carefully laid out her towel on the quarter berth that was to be her “spot” so that she’d be used to the smell and set her up with dinner. She figured that out well enough and, being the couch potato that she is and being tired from a long play date, slept there through the night. 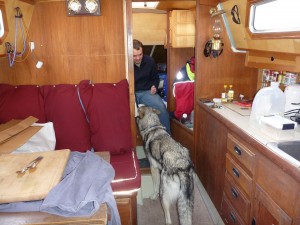 Introduction process step 2: We motivated her to explore with treats and got her used to walking around on the sloped and rocking surface of a boat inside where it was carpeted. 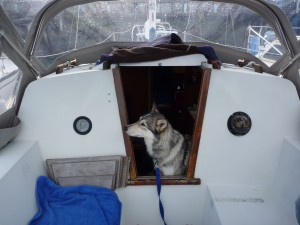 Introduction process step 3: We practiced coming in and out the companionway. This was not a favorite, but we realized that her freakishly long legs come in handy for some of the big steps. Since the cockpit is slippery for dogs, it helps that she can gracefully step out rather than having to make a flying leap and hope for a good landing. 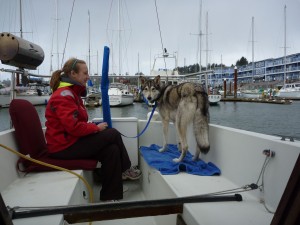 Introduction process step 4: We spent time in the cockpit between rain showers to smell the smells and enjoy the sites. 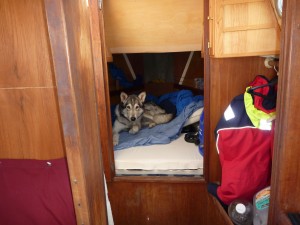 Introduction process step 5: Since everything was going along so ‘swimmingly’, we decided to try running the motor to get her used to some of the new sounds common on board. On take 1, Bella’s coping strategy was to abandon ship. After we regrouped to try again, our smarter-than-thou dog came up with her own compromise. She let herself down the companionway, knowing we’d be pleased with her new skill, and cozied up in the V-berth. 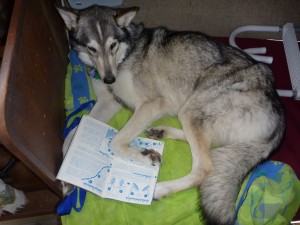 Reading up on sail theory

Compromise process step 1: No more running the engine this trip – but, she goes back to the spot we picked out for her. Since she doesn’t like the motor so much, we thought she might like to read up on some sail theory and take a nap while we made lunch.

6 Responses to “Bella on Board”