Slime Eels of the Oregon Coast 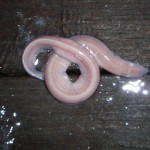 I worked with the Oregon Department of Fish and Wildlife (ODFW) Developmental Fisheries Program (DEVO) in the Spring of 2009 to assist with a research project to gather information about the population of Pacific Hagfish off the Oregon Coast.

Hagfish are one of the most ancient fish species alive today. Their bodies have an eel-like shape with a cartilaginous skeleton, four hearts, a single nostril, eye spots and no paired fins. Hagfish have poor vision, but keen senses of touch and smell. They also have a relatively low fecundity. A female is thought to be 9 or 10 years old, generally a little longer that 40 cm, when she releases her first clutch of eggs, each clutch containing from 1-25 mature eggs. Although rare, Hermaphrodites occur among large hagfish, although it is doubtful whether they are able to reproduce. 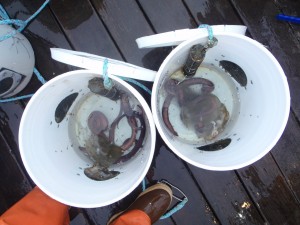 Hagfish swimming in their own slime

Hagfish are as unique a species as they are primitive. Their sucking mouths are unique to similar types of fish, and hagfish can feed by tying their bodies into knots and pulling theirs heads back through the knots as a means to gain leverage. One of the most unique and intriguing features of the hagfish (other than its fetid odor) is that by excreting a protein that mixes with seawater they create large amounts of incredibly strong and sticky “slime”. For this, they are not-so-affectionately referred to as “slime eels” by fishermen who dread bringing up a slime eel as bycatch and having to put forth an enormous effort to clean up after it.

Both Pacific Hagfish (Eptatretus stoutii) and Black Hagfish (Eptatretus deani) live off of the Oregon Coast scavenging on the seafloor. They can be found in depths of just a few meters, to over 2,400 meters. Black Hagfish, which are darker and have no visible ventral line are often not found shallower than 150 meters. Pacific Hagfish are the primary species targeted by the fishery, and they are generally fished for along the “100-fathom” depth line offshore. 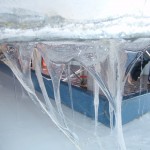 Hagfish are caught using either buckets or barrels with bait and funnels that the fish can swim in through, but that taper inwards so that the funnel cannot be used as an escape from the bucket. Escape holes are drilled into the bucket of a diameter that will allow a chosen size of small fish to swim out of the bucket while it is in the water. This way, fewer fish that are below marketable size are brought on deck to have to be sorted out and discarded overboard. Each bucket is also weighted and attached to a line with floats and radar reflectors on the ends so that a string of buckets will sit on the seafloor and “soak” for a period of time (generally 4-48 hours) and then be located by the floats and be picked up and the fish brought onboard by the bucket load.

Oregon fisheries, such as this, are protected and monitored by ODFW. The DEVO program provides and investigates alternative fisheries to asses long term economical and biological sustainability and feasibility of possible future commercial Oregon fisheries. 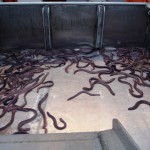 Hagfish to be sorted

Overfishing of hagfish has been an issue in the fishery around the world, so ODFW has made a great effort to study the local species population and to understand the impacts of current fishing practices and management. To collect long-term data, DEVO initiated a dockside and at-sea sampling program in early 2008. Observers from ODFW have gone on fishing trips with different vessels in the fleet to learn about the gear and methods used and to record the bycatch (of which there is very little) and quantity of below market sized fish that are sorted and discarded overboard. Samples are also gathered from at-sea trips and collected to be looked at in the lab along with copies of each vessels’ fishing logbooks when landings are made in port. From these samples, each hagfish is measured and weighed as well as dissected to determine sex and sexual maturity.

Relatively little is known about Pacific Hagfish, and although the observer program has been an excellent source of information, the samples are biased because they only come from areas that are being regularly fished and include primarily fish of marketable size. In the Spring of 2009, I was hired to work in a short term research study by DEVO to perform a more complete study of hagfish off of the Oregon Coast.

The research study involved multiple components, including an investigation of the population structure by sampling discard fish, comparing historically fished with recently unfished areas, observing hagfish behavior underwater near fishing gear and recording the survival rate of hagfish discarded at sea. There were two cruises, each four days long, one off of the Northern Oregon coast near the 100-fathom line, and one off of the Southern Oregon coast near the 100-fathom line. 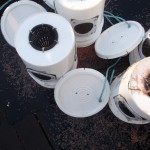 During each cruise, fishing gear was deployed with 15 five-gallon baited buckets per string in four sets of six strings. Each of these buckets was designed specifically for this project, and instead of having escape holes for smaller fish, there were mesh windows for water to flow through, but containing all of the fish that entered through the funnels. Two sets were “short” soaks, leaving the buckets in the water for only four to six hours, and two sets were “long” soaks, leaving the gear in the water for ten to twelve hours. One of each of those sets was put down in a region that has been recently fished by commercial boats, and one of each was set in an area with no recent recorded hagfish fishing activity. From each set, five random buckets were retained for laboratory investigation of the fish. The rest of the buckets were sorted by standard commercial methods and the discard percentage was determined. 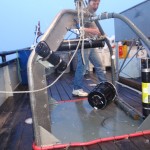 In addition to these methods, which studied the population structure and affects of fishing on the species, there were some other tests done at sea. On one of the trips, underwater camera gear was lowered overboard with standard fishing buckets (except that the bucket was painted black to minimize reflection of the camera lighting off the bucket surface and to reduce visibility), and again with a research bucket with mesh windows. There was also a string of buckets that had windows for water flow, but no entrance funnels into which we put discard hagfish. We set this string during the nights to study the survival rate of discarded hagfish that have been brought onboard but do not meet market size requirements and are then dumped back overboard.

The sample collection aspect of the hagfish research project was very brief, consisting of two four-day fishing trips with three fishermen and three scientific crew, but the weather was unbelievably calm and we were able to reach all of our goals. The lab work ups of all of the samples is taking much longer to complete and a report will be finished around December 2009. The results will be a great asset in the management of the fishery since the DEVO program is on a temporary hiatus due to funding and hagfish is likely to change status to either a Limited Entry or full Commercial fishery.

One Response to “Slime Eels of the Oregon Coast”